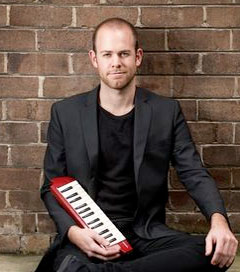 New Zealand-born pianist and composer, Steve Barry, named Young Australian Jazz Artist of the Year at last month’s Bell Awards, performed as a trio with Tom Botting on bass and Tim Firth on drums at Bennetts Lane Jazz Club in Melbourne on 25 June as part of a nationwide tour around Australia. “Only a handful of punters braved the winter chill to see Barry on his first visit to Melbourne as bandleader,” reviewer Jessica Nicholas wrote. “Rather than being disheartened by [the] turnout, however, Barry gave those who had come a night to remember, pouring as much energy and commitment into his playing as if he were performing in front of a sell-out crowd. Sydney-based Barry at 24 is still relatively unknown on the national scene, [however] that should soon change, if [this] concert – and Barry’s exceptional debut CD – are any indication. The trio’s creative empathy was immediately apparent on tunes such as Epi-phany, where the musicians eschewed a clear rhythmic focus for a diaphanous, drifting feel, shifting our attention seamlessly from one player to another with each glistening chord, reverberant bass note or softly padding mallet. While Barry and his colleagues are capable of great sensitivity, they can also lock in tight to navigate the leader’s more elaborate tunes, generating moods of bristling drama and powerful momentum – even when leaping across elusive time signatures and unusual chord progressions, as on [the] memorable closer, Parks.” Barry is currently undertaking a PhD in solo piano composition at the Sydney Conservatorium of Music.