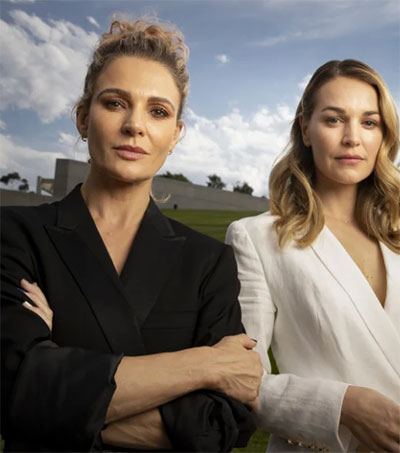 New Zealand-born actor Danielle Cormack (pictured left) seems passionate about politics. She was in the Australian capital recently talking to the Canberra Times about the second series of Secret City: Under the Eagle, which premiered on 4 March – and happy to follow tangents discussing gender equity, motherhood, politics and power.

“There were so many amazing politicians to draw from for this role,” Cormack says, of her character Karen Koutoufides.

“There was talk in the writer’s room about Jacqui Lambie, but I looked towards some independent MPs in this country and also female politicians, women who have been pioneers and have lobbied for policy that has been life-changing for a lot of women.”

“It’s not a fair playing field – I don’t think I would ever get into politics,” she says.

“I think I’m better using my voice as a ‘public figure’, if you like, instead of jumping into the real world.”

While Secret City, once again, is a thrilling tale of espionage, politics and international relations all shot in Canberra, there’s something of a feminist edge to the second series. Women seem to shine in every scene.

Cormack, 48, was born in Auckland.

She portrayed Bea Smith in the Foxtel prison drama Wentworth, in which she starred for four years before leaving the show in 2016.