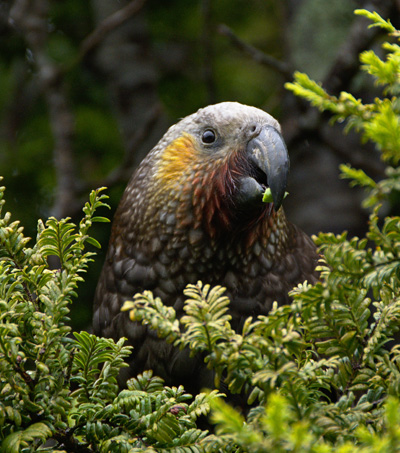 New Zealand’s War on Rats Could Change the World

Before they were brought to New Zealand in the 13th century, the only land mammals in the country were bats and local birds could roam free. Today much of New Zealand, “has been so denuded of birds that their melodies feel like a rare gift,” writes Ed Yong in an article for The Atlantic. Many species now persist only in offshore islands where predators have been successfully eradicated”.

“In recent years, many of the country’s conservationists and residents have rallied behind Predator-Free 2050” – “an extraordinarily ambitious plan to save the country’s birds by eradicating its invasive predators.” So far no country, anywhere in the world, has managed such a task in an area that big, as reported in the article.

It all started in 2007 with retiree Les Kelly, who “conceived a bold plan to purge introduced pests and championed it through a self-created lobby group called Predator-Free New Zealand. Two years later regionally famous physicist Paul Callaghan mentioned the idea in a rousing speech at Zealandia and in 2015 ecologist James Russell and three colleagues wrote a paper in which they laid out the benefits of eradicating pests nationwide. It was then that the government got on board.

“By coincidence, the rise of the Predator-Free 2050 conceit took place alongside the birth of a tool that could help make it a reality – CRISPR, the revolutionary technique that allows scientists to edit genes with precision and ease,” writes Yong.

According to the article the gene-editing technology could help – or it could trigger an ecological disaster of global proportions. Some scientists, “see the potential for ecological catastrophe, beginning in an island nation with good intentions but eventually enveloping the globe,” writes Yong.

“We could just use the tech today but it would be infinitely expensive. We need new control techniques that would be orders of magnitude cheaper. And that’s when we get into questions about CRISPR,” said Russell.

“Applications are vast, but so are the risks. In theory, gene drives spread so quickly and relentlessly that they could rewrite an entire wild population, and once released, they would be hard to contain. If the concept of modifying the genes of organisms is already distasteful to some, gene drives magnify that distaste across national, continental, and perhaps even global scales,” reports the article.

Kevin Esvelt, a biologist at MIT, who drew the Venn diagram laying out several possible uses for gene drives – including “to control invasive species—like rats,” now says it was “profoundly wrong” to suggest it. He “has now “shown that gene drives are even more invasive than he expected” through mathematical simulations conducted with colleagues at Harvard.

“Even the weakest CRISPR-based gene drives would thoroughly invade wild populations, if just a few carriers were released.” “If conservationists tried to eliminate rats on a remote island using gene drives, it would only take a few strongly swimming rodents to spread the drive to the mainland—and beyond.”

“Together with Neil Gemmell from the University of Otago, who is advising Predator-Free 2050, Esvelt has written an opinion piece explicitly asking conservationists to steer clear of standard gene drives,” reports the article.

“Russell agrees with a precautionary approach but he isn’t ready to dismiss gene drives yet” as he “feels that Esvelt’s simulations overestimate the risk that such drives would establish themselves in the wild.”

Despite the buzz around gene drives in New Zealand’s conservation circles, there are no concrete plans to actually use them, according to the article. “There is currently no research being conducted in New Zealand to develop gene drives for Predator-Free targets, nor are there any plans for such research in the near future,” said Andrea Byrom, director of New Zealand’s Biological-Heritage National Science Challenge.

“Regardless of the technology that Predator-Free 2050 eventually settles on, there’s no question that such measures are needed,” writes Yong. And “New Zealand is far from the only country grappling with these issues. Over the last seven centuries, 60 percent of the vertebrates that have disappeared from the planet have disappeared from islands—and in half of those cases, invasive species are the culprits.”

“If Predator-Free 2050 makes the right choices, it can indeed change the world—but not with an unstoppable wave of gene-drive rodents. Instead, it’ll show other nations that islands can be protected, that invasive pests can be eradicated, that vanishing wildlife can be saved—even at scales once thought impossible.”