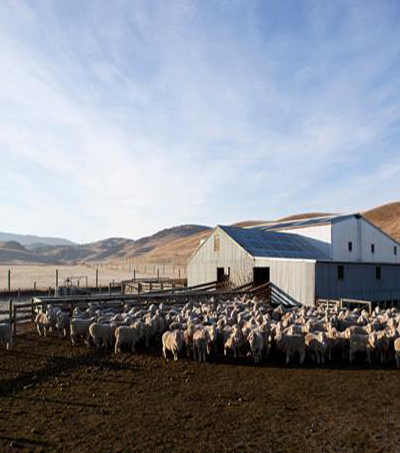 The changing face of sheep farming in New Zealand, with a focus on sheep meat exports over the traditional wool harvest, is mapped in an extensive New York Times feature by journalist Mike Ives.

“About three decades ago, when Andrew Fraser began raising sheep, wool was among the star exports of this sparsely populated nation. Its other sheep products — lamb and mutton — were supporting actors.

Today, the situation is reversed. New Zealand’s sheep meat exports are up, while wool, whose export earnings have been sliding for decades, faces intensifying competition from synthetic fibers.

Although sheep farming is still enmeshed in the fabric of New Zealand’s cultural identity, it is another economic activity that this remote South Pacific nation is retooling for an increasingly globalized world.

New Zealand, with 4.4 million people, is the world’s third-largest wool producer behind Australia and China, according to Beef and Lamb New Zealand, a farmer-owned industry group. It supplies 45 percent of all carpet wool globally, the Australia and New Zealand Banking Group said in a report last year.

“The boot is sort of on the other foot now,” Mr. Fraser said while driving a four-wheeler through sheep pastures that he manages on New Zealand’s South Island. At a nearby fence, fuzzy newborn lambs the size of lap dogs were congregating shyly at their mothers’ heels.

“Wool has traditionally been – and still is – a very good product,” he said. “The trouble is that now, a similar product can be manufactured out of used Coke bottles and all sorts of stuff.”

From 1982 to 2011, New Zealand’s sheep population declined to 31.1 million from 70.2 million, according to government data, as many sheep pastures were converted to dairy farms or other uses. The roughly 17,000 sheep farmers who remain still earn money from selling the fleece of their animals. But on many sheep farms, meat has replaced wool as the primary profit maker.

Since 1990, the value of New Zealand’s annual exports of raw wool and manufactured wool products has declined to about $700 million from $1.2 billion, according to government data. By contrast, lamb and mutton exports have increased almost threefold to $2.3 billion. And dairy exports, worth $1.9 billion in 1992, have soared to $14.1 billion.

To increase their profits, sheep farmers are increasingly turning to crossbred varieties that produce more meat.

Still, farmers said, the wool industry would benefit from having a unified voice to promote New Zealand wool abroad as a high-end fiber that, in their view, beats synthetic alternatives in several categories, including overall quality and environmental sustainability.

“It’s the difference between the Model T Ford and the Ferrari,” said William Rolleston, president of Federated Farmers of New Zealand, a lobbying group based in Wellington.

Wool growers long assumed that their industry would somehow look after itself, but there is now a clear need to promote wool over synthetic fibers, Sandra Faulkner, leader of a campaign for a wool tax said. According to Beef and Lamb New Zealand, wool accounts for 1.3 percent of global fiber production and synthetics 61.4 percent.

“It’s about identifying ourselves in the luxury marketplace, which is where we’ve always belonged,” she said.

However the industry changes, New Zealand’s sheep will still grow their fuzzy winter coats and require the occasional haircut.