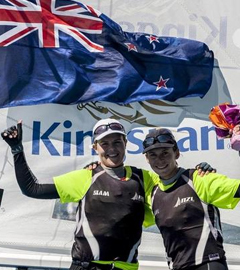 “Finally our first world title in the 470!” exclaimed Aleh. “We won the medal race to finish in style. One year ago today it was Olympic Gold, now the world title.”

Aleh and Powrie announced their campaign towards Rio 2016 in December last year and since getting back in the boat early in 2013 have taken out Oceanbridge Sail Auckland, EUROSAF Champions Sailing Cup in Garda and Delta Lloyd Regatta now adding the 2013 World title topping off an excellent year.