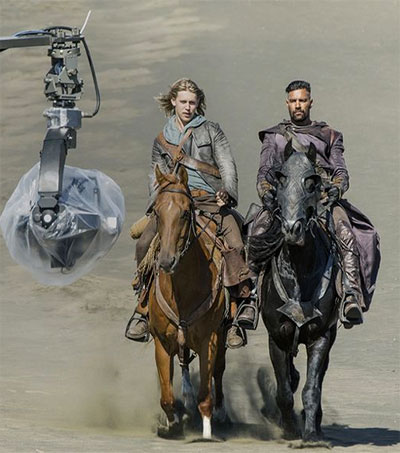 MTV’s new fantasy series The Shannara Chronicles is set in the future but features elves and gnomes and promises plenty of old-fashioned adventure all filmed in the town of Kumeu, in New Zealand’s scenic wine country.

The network granted The Associated Press exclusive access during filming earlier this year and here is what some of the cast and crew had to say.

Austin Butler, who plays Wil Ohmsford said: “After finishing filming here I would have spent a year of my life in New Zealand, which is pretty wild. It’s just such a magical place. Whenever I Skype with friends back home or anything, I’m always just going, ‘The locations that we’re filming on. I’m swimming in a waterfall today, or I’m looking at this majestic landscape.’”

Co-producer and director of four episodes Brad Turner said: “We’ve focused entirely on making the show cinematic. We’re shooting with lenses you’d normally shoot for a movie, in a movie theatre. We’re using huge cranes, we’re going to distant locations that normal television shows wouldn’t want to because the logistics are so complex.”

The Shannara Chronicles is set to premiere in the United States on 5 January.