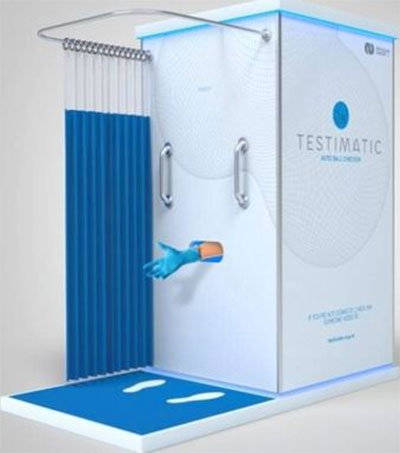 Ever thought of getting a health check but worried about having to? Well, drop your pants. Meet the Testimatic, a booth allowing New Zealand men to have their testicles checked without having to face a doctor.

Testicular cancer is the number one cancer in young men in Western nations. The booth was unveiled at the Big Boys Toys expo, a huge exhibition in Auckland catering to all things men stereotypically are supposed to be into.

Strolling between all those markers of perceived old school masculinity, there was the Testimatic, labelled as “the world’s first auto ball checker”.

What you do is muster your courage, step up to the booth, pull a curtain around you and drop your pants.

What then happens is not some fancy high tech screening process – instead, there’s a good old urologist sitting in the booth who – through a hole – will have a little feel of your balls. In a matter of minutes, you’ll be good to go again.

The project is in line with Testicular Cancer New Zealand’s goal to raise awareness of the illness. The cancer has very high rates of being cured, but it all depends on how early it’s diagnosed.

According to Testicular Cancer New Zealand, 90 per cent of cases are cured – if detected at an early stage, the rate is about 99 per cent.