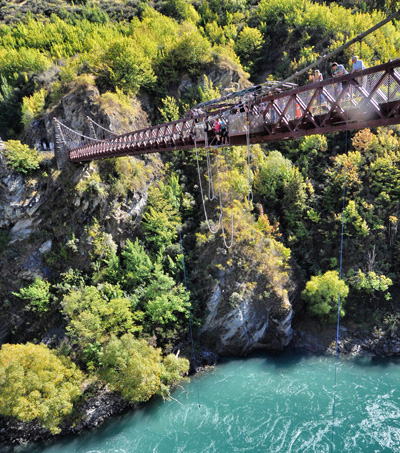 New Zealander Henry van Asch was bumming around the ski slopes of Wanaka in the 1980s when his friend A.J. Hackett persuaded him to try a strange new extreme sport – hurling himself off a bridge with just a thick rubber rope around his ankles, writes Mark Ellwood in an article for Conde Nast Traveler. Van Asch tried it and soon “the pair was encouraging other brave buddies to take the plunge.” Of course, the sport that Henry and his friend A.J. Hackett had accidentally invented was bungee jumping.

“Their first commercial site—the first anywhere in the world—was Kawarau Bridge Bungy on New Zealand’s South Island and consists of a 140-foot drop from a steel-framed bridge over a rushing river.”

Even after bungee jumping exploded around the world, “it’s still synonymous with New Zealand,” writes Ellwood. “And since then, in and around the settlement of Queenstown, an entire extreme sports eco-system has emerged.”

Another example of New Zealand adventure sports is Mark and Laurel Morrison’s Wildwire Wanaka which saw them importing the Alpine tradition of via ferreta to New Zealand.

“This involved bolting metal rungs into a steep cliff face, like a permanent ladder, to allow the adventurous to ascend, crampon-free,” as reported in the article.

Wildwire offers three different climbs in a range of difficulty levels. It’s located by the Twin Falls waterfalls, 90 minutes’ drive from Queenstown, which adds a dramatic backdrop to the 3,000-foot climbs.

There are a lot more “unusual outdoor pursuits “ on offer in New Zealand: “alongside skydiving, zip-lining, and jet boating, you can try Zorbing in a giant plastic ball around the countryside or canyon-swinging, which is a madcap cross between bungee and trapeze.”