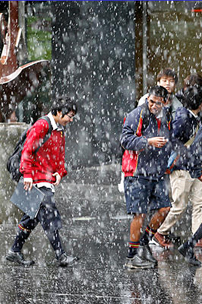 August saw freezing cold and snow blanketing virtually all of the country, even typically mild cities such as Wellington and Auckland, which last saw accumulated snow 45 and 72 years ago, respectively. “What began late Sunday afternoon as a few fat flakes — quick, honey, grab the camera, this’ll be gone in a minute! — soon turned into an all-out blizzard as the unusually strong Antarctic front lingered over the island nation like some extremely unpleasant dinner party guest,” Christian Science Monitor correspondent David Cohen wrote from the capital. “As much as two feet of snow [were] reported in some places, with neighborhoods here in the sea-level capital recording several inches of the white stuff.”