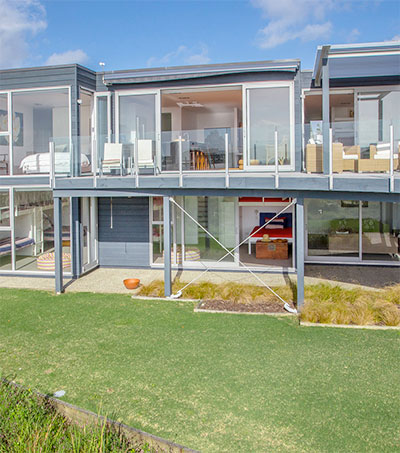 A bach on the beach has long been the embodiment of the New Zealand dream, with the traditional version often a modest structure haphazardly pieced together with corrugated iron and reused timber.

Lance and Nicola Herbst, husband-and-wife architects, arrived in Auckland from South Africa 17 years ago and were surprised to find that almost everyone had one.

“In South Africa, holiday homes were limited to the very wealthy,” Lance Herbst said, “but here, ordinary people had access to a ‘bach.”’

In recent years, however, the dream has become more difficult and expensive to obtain. Building standards have been strengthened, bylaws now regulate the use of coastal properties and the price of waterfront land has skyrocketed.

Last year, Ken Crosson, another Auckland-based architect, received an Architizer A+ Award at a global architecture award ceremony in New York for a holiday home he called the Hut on Sleds, which stands on the Coromandel Peninsula.

This 40-square-metre wooden home was built in 2011 in an erosion zone, where regulations say all buildings must be removable. Crosson’s solution was to sit the structure on runners, so it could be towed away.

Crosson said the owners had wanted an affordable holiday home that still allowed them to make the most of a beach lifestyle.

“We have a fabulous coastline,” he said, “and to put more of the same old suburban houses on it is just disappointing.”

Whatever its form or specific location, owning a holiday home is still very much a Kiwi aspiration, said Helen O’Sullivan, chief executive of the Real Estate Institute of New Zealand.

“It’s everything from land purchases in the middle of nowhere that people can enjoy with a tent, all the way up to beautiful beachfront homes,” O’Sullivan said, adding that even the most old-fashioned baches sell quickly in high-demand areas. “The bach itself might be exactly the same as when it was first built. It’s just it now has mansions on either side.”