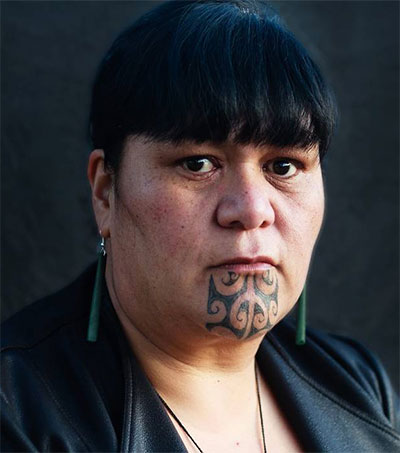 For Maori women, the moko kauae, or traditional female chin tattoo, is considered a physical manifestation of their true identity. It is believed every Maori woman wears a moko on the inside, close to their heart; when they are ready, the tattoo artist simply brings it out to the surface. Nanaia Mahuta is the first member of parliament in the world to wear a moko kauae.

The 46-year-old made history not only because of her decision to wear her Maori identity on her face in a political arena, but as part of the resurgence in Maori women receiving the traditional ink.

“There were a number of milestones in my life, and it felt right to mark them in a way that is a positive statement about my identity,” Mahuta tells VICE. “Who I am, where I come from, and the contribution I want to continue to make. When I got it done, I felt incredibly calm. I felt like it had always been there.”

Ta moko artist Pip Hartley, 33, is another of a new generation of Maori who are carrying the art form forward. When she was 18 she started travelling to remote regions of the country to learn the ancient art, before opening her Auckland tattoo studio, Karanga Ink, this year.

For weaver Jude Hoani, receiving her moko last year was about defining who she is. “I’ve got one of those faces that can fit in many cultures,” Hoani says, “and for me it was about making a statement about who I am in relation to this country. I’d been thinking about it for the past 20 years.”

The design on her chin is a stylised ruru, or owl. According to Maori tradition, the ruru is the kaitiaki (guardian) of the chin. Her moko also has elements of a carving design particular to her tribe, Ngapuhi.