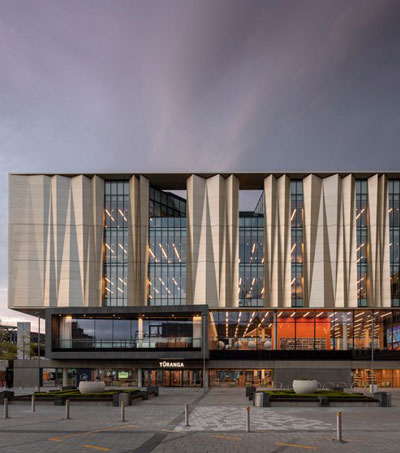 New earthquake-resistant library in Christchurch, named Tūranga, was featured in an article in Designboom. The new building by Schmidt Hammer Lassen Architects “provides a 9,500 sqm public space that strengthens the local community and aims at drawing people back to the historic city center.”

Together with Architectus, Schmidt Hammer Lassen Architects “developed the new central library as a symbol of hope, unity, and rebirth.” “Thanks to an integrated, self-centering mechanism that allows the building to sway and then return to its original position, Tūranga can sustain minimal structural damage during a large earthquake.”

The architects collaborated with the Matapopore Charitable Trust to “ensure the values, aspirations and narratives of the local Ngāi Tūāhuriri people were realized.”

“It has been a privilege to design a project that not only fulfills the need for a new central library, but also one whose mission of restoring the soul of the city includes the deep cultural heritage of Ngāi Tūāhuriri, the local Māori people.”

“The cultural representation in the library is first evident in the golden veil that cloaks the building in a striking, graphic façade, which intensifies at sunset with the day’s last rays. The vacillating form of the façade references the surrounding rolling hills, visible from the upper floors of the library, and the long, thick blades of the local harakeke flax, a fundamental natural resource for traditional cultural practices,” as reported on Designboom.