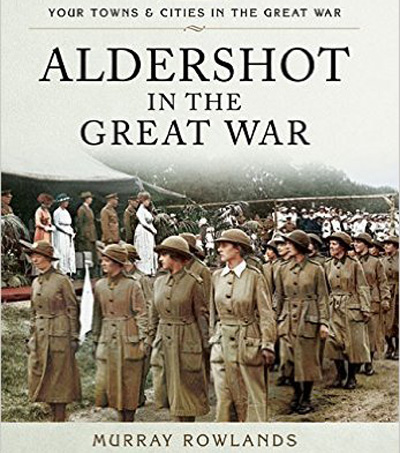 Aldershot in the Great War: The Home of the British Army, part of the Your Towns & Cities in the Great War series published by Pen and Sword Military, is the first book written about Britain’s premier army base in the First World War. Murray Rowlands, author of Innocents into War and The Andropov Tapes and a native of Christchurch, emphasizes the history of the Hampshire town as a connective hub between England and New Zealand during WW1.

“I kept coming across important links between New Zealand and Aldershot,” Rowlands explains. “Possibly the most significant was the presence of Sir Harold Gillies at the Cambridge Military hospital pioneering plastic surgery in 1916. Gillies was given a ward at one of Aldershot’s two hospitals and virtually starting from scratch developed a whole science around the reconstruction of men’s faces. Significantly, after the Battle of the Somme, some of his patients were New Zealanders. The hospital with all its memories is now being pulled down so it is vital that this part of its heritage is remembered.

In addition, close to Aldershot is the small village of Ewshot, which following Gallipoli in 1916 became a major camp for the New Zealand army and served as the base of the New Zealand artillery. During the Great War, Ewshot also offered a hospital for New Zealand soldiers and was at the center of military rugby matches.  Among the items that distinguish Rowlands’s historic volume, Aldershot in the Great War contains the first published record of troops in Aldershot at the outset of WWI, the first published list of officers and men from the area killed in the war, and traces the growth of aviation manufacture in the region from ballooning to major military aircraft. Aldershot in the Great War is available now in paperback or Kindle versions on Amazon.