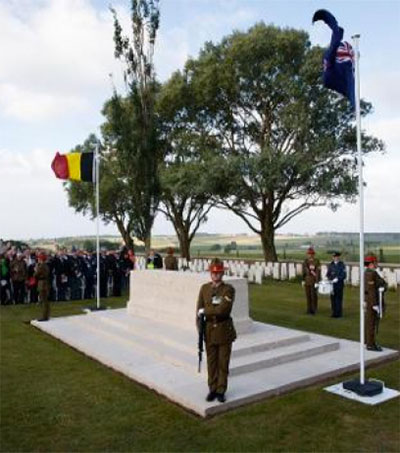 Commemorations of the 100th anniversary of the Battle of the Mines began last week in Messines with a tribute to the New Zealand soldiers in the presence of numerous Belgian and foreign personalities, Christopher Vincent reports for The Brussels Times.

“The Battle of the Mines of 1917 was one of the key moments of the First World War,” Vincent writes. “This important British offensive marked the beginning of the end of the conflict. Twenty-four mines had been placed in tunnels dug under the German lines. Nineteen of them exploded simultaneously on 7 June 1917 at 4:10 am, ‘zero hour’ for the British, provoking a major earthquake. Historically, only the atomic bombs dropped on Japan in 1945 caused a greater shock wave. The offensive killed many German soldiers.

“Gregory Andrews, New Zealand’s ambassador in Belgium and Patsy Reddy, Governor General of New Zealand, called for all efforts to be made to avoid such conflicts in the future.

“Messines became a place of pilgrimage for the New Zealanders, where 3700 of them died. Ten per cent of the New Zealand population of the time was sent to fight in Europe and many New Zealanders never returned. Three young people – a German, a Belgian and a New Zealander – read testimonies of soldiers who fought in Messines.”