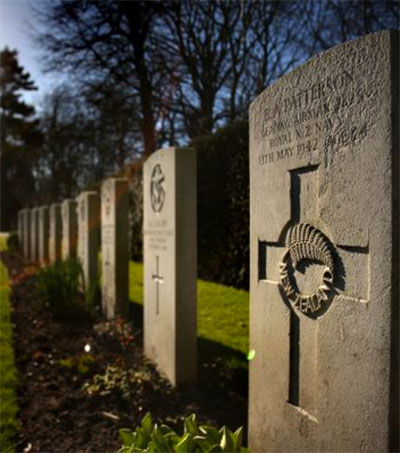 A quiet corner of a Scottish cemetery was the sombre setting for remembering the darkest day in New Zealand’s military history. Figures from Angus and across the Commonwealth gathered at the graveside of four New Zealand airmen, whose final resting place in Arbroath’s Western cemetery has, for nearly two decades, been a central focus of Scotland’s annual ANZAC commemoration, remembering the sacrifice of New Zealand and Australian servicemen and woman in conflicts around the globe.

The late April date coincided with the anniversary of the First World War Gallipoli campaign, but this year also marks the centenary of the brutal Passchendaele battle in which more than 800 New Zealanders died and almost 2000 were wounded after being trapped in the mud and wire of the Belgian trenches.

The bloody massacre represented the first time during the Western Front battles that the New Zealand Division was unable to achieve its objective and remains the blackest day in the nation’s history.

The Queen was represented at the ceremony by Georgiana Osborne.

Osborne, who gave the main address at the event, said: “The ANZAC ceremony has been organised jointly for many years now by the NZ Society Scotland and the Arbroath branch of the RBLS and it is always a very moving occasion.

“It is a fitting remembrance of all ANZAC servicemen and women.”

As part of the service, remembrance crosses were laid by local youngsters having been inscribed with ANZAC thoughts and sent from Awapuni Primary School in Gisborne.

They were placed at the memorials to New Zealand airmen Frederick Batten, Richard Chettle, William Drake and Brian Patterson, who perished in mid-air collisions and non-action accidents above or near the Angus town during the 1940s.