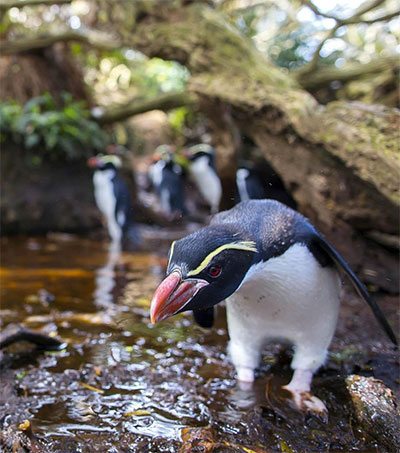 “In New Zealand, you’ll be interested to learn, there are more species of penguin than anywhere else in the world,” the Independent’s deputy managing editor Sean O’Grady writes in a preview of BBC Two series, New Zealand: Earth’s Mythical Islands, narrated by actor Sam Neill.

“There is, for example, a type called Snares Penguins, which inhabit the still more remote Snares Islands,” O’Grady writes. “They have a slightly stooped gait, prominent beaks and a tuft of unruly hair that will put you in mind of our new foreign secretary each time you see them manoeuvring around their own unusual terrain, a forest.

“Maybe when Boris Johnson gets round to visiting New Zealand he will be introduced to these miniature Bozza-look-a-likes. Maybe in 80 million years’ time the whole of the British population, cut off from the rest of the world, will be a race of pure euro-sceptics.

“You will also be enchanted, I think, by the other unique flora and fauna, though in this first episode the famous kakapo bird, a flightless parrot with a humanoid face, failed to put in an appearance. I remember first seeing one almost 30 years ago in Last Chance to See, a series devoted to near-extinct creatures presented by Stephen Fry and Douglas Adams. Thankfully the kakapo, which had no natural predators until man arrived with rats, cats and dogs, is still with us. So is the Jurassic era mini-dinosaur Tuatara, the kiwi and the magnificently named Dusky Dolphin.”

The first episode is called Cast Adrift and takes a look at New Zealand wildlife, “which has been isolated since the dinosaurs”.