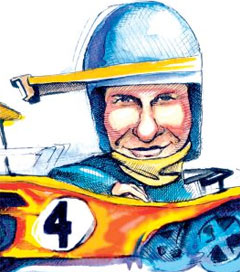 In his all-too-brief life, New Zealander Bruce McLaren, who died in 1970 at the age of 32, managed an impressive list of successes, writes Jason Stein for Wheelbase Media. “His European driving career began while he was barely into his 20s and his first win came at age 22 at the 1959 United States Grand Prix. Seven years later the talented McLaren had formed his own team and was driving in a chassis built by his company, Bruce McLaren Motor Racing Ltd. The 1968 Belgian Grand Prix would mark the site of McLaren’s one and only victory piloting his own car. Between running his race teams, designing both Grand Prix and Indianapolis customer cars and competing in both the Canadian-American Challenge Cup series (Can-Am) and Formula One, McLaren also found time to help develop the Ford Motor Company’s assault on one of the world’s most prestigious motor racing events: the annual 24 Hours of Le Mans endurance race held in France. In fact it was McLaren who, along with driving legend Chris Amon, piloted a GT40 to victory in 1966, which was Ford’s first at this fabled circuit. In North America, Bruce McLaren’s name and reputation might have been almost unknown were it not for Can-Am, a short-lived racing series (1966-‘74) that produced some of the wildest and most exhilarating competition ever seen. The simple experience of being a spectator was nothing short of incredible. As a young man, I was fortunate enough to have attended a 1970 race held at Mosport Park near Toronto, and recall positioning myself on a hill overlooking Turn Three, waiting for the event to begin. The slow-moving train of about 20 mid-engined cars made a deafening sound during the warm-up lap, but when the race began, the ground literally trembled as the shock waves from the car’s monster motors penetrated the earth’s crust.”