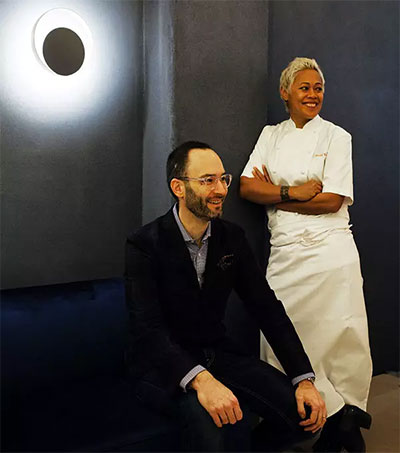 Monica and David Galetti have left their chef and sommelier roles at Le Gavroche to start anew in Fitzrovia. They talk work-life balance, Brexit and the joy of champagne with the Financial Times.

The couple became part of the staff family at “Le Gav”, working under chef-patron Michel Roux Jr to become senior sous chef and head sommelier respectively, handing in their chef whites and corkscrew last year when they announced a new venture, a restaurant of their own.

The timing, New Zealander Monica says, felt right. Filming MasterChef: The Professionals, which she has done for the past eight years, is an intense but shortlived commitment. A restaurant in your own name, on the other hand, is almost guaranteed to send all the plates of your life spinning. “Our most important factor was our little girl. It’s never the right time to be away from [your children], but now she’s a bit older, we can manage a bit easier. She’ll probably be napping in the kitchen so I can see her … ”

Monica and David will be on site at the restaurant – named Mere after Monica’s mother Mary, and the French word for mother – for at least the first 12 months, lunch and dinner, Monday to Saturday.

About six weeks from launch, the expensive carpet in the bar area is covered with thick plastic sheeting, the curved cocktail banquettes hide their blue velvet under dust sheets, and bubble wrap is draped over a giant golden disc of resin on the wall — an artwork representing Monica’s favourite drink, champagne.

The blues are meant to be reminiscent of both France and Samoa, where Monica was born; downstairs the dining room looks on to a gallery of used Château Margeaux and Pichon Lalande cases, which David brought over from his family home in the Jura.

And then the couple talk about their already loyal customers from their time at Le Gavroche – some of whom apparently pop their head around the door at Mere from time to time to see how things are getting on. With uncharacteristic reticence, Monica says they are following her husband more than they are following her: “David’s more front of house than I ever was; I prefer to hide behind the scenes, to be honest.” That may be the case but under a restaurant roof, they are both in their element.