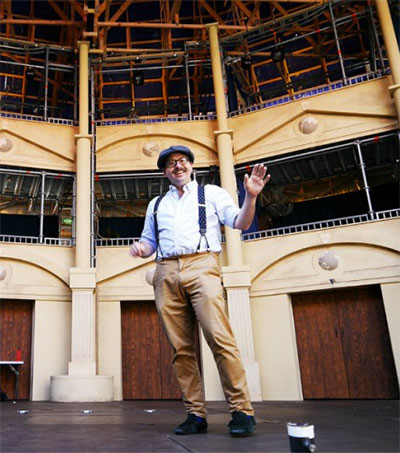 Miles Gregory’s Globe to Pop up in Melbourne

The Pop-Up Globe theatre, brainchild of New Zealand-born Miles Gregory, is opening in Melbourne in September, and will host four plays: Much Ado About Nothing, Othello, As You Like It and Henry V.

The Pop-Up Globe theatre is a three-storey, 200 tonne building that takes 90 people to build and can house an audience of up to 900.

Based on Shakespeare’s Globe Theatre, built in 1614, the Pop-Up was conceived to showcase the plays as they were performed back in the 17th century. Funny, captivating and poignant, performances then were interactive and far more playful than modern audiences might expect.

The idea came to Gregory when he was reading his daughter a pop-up book, which featured London’s Globe Theatre. She asked if she could go to it but from Auckland that would take some doing. The moment inspired a vision Gregory couldn’t let go.

Determined that Shakespeare’s work was meant to be fun, immersive and joyous, Gregory and a small team of believers decided to build their own replica of the Globe and to stage their version of the Bard’s work. Each show needed to be an epic spectacle, including live music, sword fights, pyrotechnics and dancing. In keeping with the experience of audiences back in the 17th century, it was envisaged as a rollicking, entertaining night out.

“We don’t do director’s theatre, we’re really quite conservative, we try to remain faithful to the story and make work that is recognisable as the play,” Gregory says. “None of our works are museum pieces. We’re very interested in the subversive: setting up one idea and then taking you on a journey where you didn’t expect to go. I think audiences like that too.”

The Pop-Up Globe is on in Melbourne’s newly christened Shakespeare Gardens from 21 September until 12 November.

Gregory has worked in theatre as an actor, director and producer.