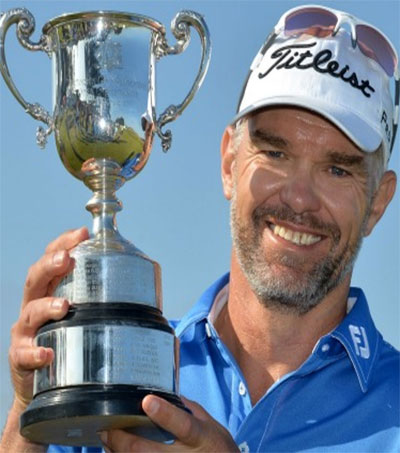 Cromwell-born former PGA Tour professional Michael Long said he could not have hit the incredible chip shot that won him this year’s Vic Open if he had another 99 tries.

Long admitted he thought he had lost the tournament when he pulled his second shot left on the par five 18th hole into the hazard, leaving his ball nestled in knee-deep reeds and three-feet off the ground.

He says he could not explain the magic that occurred from that point on, as he somehow executed a perfect 40m chip from the treacherous lie to within six-feet of the pin.

Seconds later, the veteran stepped in front of the big galleries circling the green and rolled in the winning putt, prompting an uncharacteristic swinging fist pump from the usually-reserved Long, and the creation of the latest Vic Open “moment” on the 18th green of the Beach Course.

“That one will live forever,” he said of the amazing up-and-down.

The event’s banner is “where stars are born”, but Long made history by becoming one of the oldest winners of the tournament at age 47 – with his seventh professional victory with an overall score of 13-under.

Long is a part-time professional now. The golf club at which he is general manager allows him to take weekends off during the summer to compete in events and his weekly practice schedule consists of nine holes on a weekday, and then driving range on the weekend.