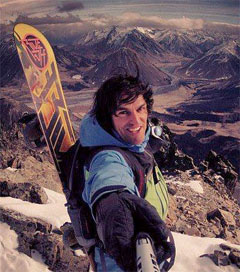 Snowboard coach with Aspen Valley Ski & Snowboard Club (AVSC), New Zealander Tim Ward, 33, talks about his role with the club and about his focus on developing the person first and the athlete second.

Originally from Methven, Ward has been working fulltime for AVSC for three years, and he has coached roughly the same group of kids every season.

“Some of the kids have aspirations to be specialized snowboarders; some just want to hang out with their friends and do something awesome,” Ward said.

Aspen Valley Ski coaches focus on fundamentals with all of their young athletes. Even the most difficult tricks can be broken down into basic steps, Ward said.

“I like to use the Jenga analogy,” Ward said. You have to have a good foundation “if you want the tower to grow.”

“It’s more [about] developing relationships with the kids and mentoring them and helping them grow as people, as well,” he said. “We grow really good people first and really good athletes second … I feel very blessed to have that opportunity to participate in these young people’s lives so much.”