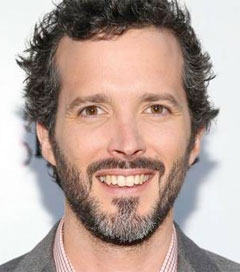 McKenzie Stars in Austenland Though More a Brontë Man

Bret McKenzie, 37, one half of the comedy duo Flight of the Conchords, stars opposite Jane Seymour in the new romantic-comedy Austenland, which opened in the UK in September.

“I’m not a crazy Jane Austen fan,” shrugs Wellington-born McKenzie. “I was more of a Brontë fan. There weren’t enough moors in the Austen books.”

McKenzie meets The Independent’s Gill Pringle over tea at the Windows Lounge in Beverly Hills. He’s just completed music and lyrics for the hotly anticipated Muppets Most Wanted live-action sequel, which promises to be a far edgier proposition, starring Ricky Gervais and Tina Fey.

“This one is a lot less saccharine than the first,” he assures.

Presently featuring alongside Seymour, Keri Russell and Jennifer Coolidge in Austenland, McKenzie tells of his surprise upon arriving at the film’s Bath location to discover it was a Mormon production.

“To be honest I’m pretty impressed by the Mormons. They’re just really cool although I think I met the coolest Mormons. It wasn’t like working on a Scientology film where they’re secretly trying to screen my calls. Next time I’ll do a Scientology film. But I love how [‘Twilight’] Stephenie Meyer kind of heads up the Hollywood Mormon mafia.”