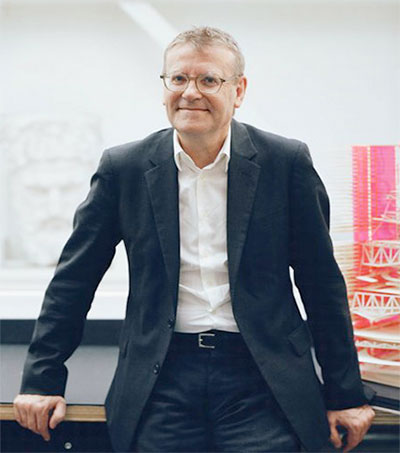 New Zealand born architect and author Mark Wigley is the jury chair for the Guggenheim Helsinki Design Competition, which has now announced finalists for the as-yet-unapproved Guggenheim art museum in Finland’s capital.

The jury has now announced a shortlist of six finalists for a controversial, proposed Guggenheim art museum in Helsinki. They were chosen from 1715 entries submitted by September. Competitors came from 77 countries.

This massive list was winnowed down to the half dozen finalists by an 11-member jury. It is led by Wigley who recently stepped down as head of the Columbia University Graduate School of Architecture, Planning and Preservation in New York. He said they met for four “intense” and “brutal” days in Helsinki to choose the shortlist.

Wigley said that none of the anonymous images released now would necessarily ever be built, but that the decision represents the beginning of a discussion with the architects. “Now the work begins,” he added. “What you see in six months’ time will be completely different.”

“These projects have to be open to new potentials of what a museum is: new relationships with citizens, with artists, with the public and the city. So it was a very strong desire of the jury that these projects are embedded in the social fabric of Helsinki.”

The six finalist concept designs can be seen on the project’s website. The winner is to be announced next June.

Wigley has written extensively on the theory and practice of architecture and is the author of Constant’s New Babylon: The Hyper-Architecture of Desire (1998); White Walls, Designer Dresses: The Fashioning of Modern Architecture (1995); and The Architecture of Deconstruction: Derrida’s Haunt (1993).