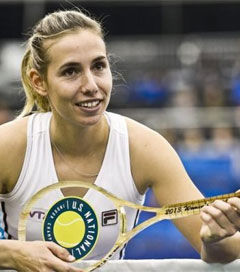 ‘Run up the flags. New Zealand finally has a winner again,’ said Bob Greene of World Tennis Magazine. He was talking about Marina Erakovic winning her first World Tennis Association (WTA) title. The win came in Memphis Tennessee, at the US National Indoor Championships. Erakovic won when third-seeded Sabine Lisicki retired after losing the first set. Erakovic’s win was a great moment for New Zealand tennis, as she became the first New Zealand women to take out a WTA tournament since Belinda Cordwell in 1989. ‘The guitar trophy couldn’t have fit a player better. Erakovic not only plays guitar, she also travels with one,’ World Tennis said.  I think [the win] means quite a bit for New Zealand’, Erakovic is quoted as saying. ‘We’re a small place, and tennis isn’t the most popular sport. But whenever I’m somewhere else in the world and someone asks me where I’m from and I say New Zealand, they always say they love New Zealand. And there are always a lot of Kiwis supporting me around the world. So this is great.’