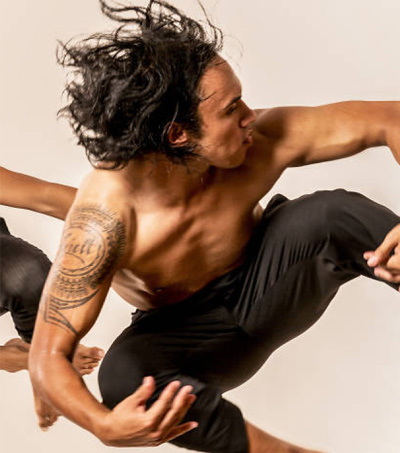 Seibert lauded the “unaffected style of the troupe and the innovative choreography of its artistic director and founder, Neil Ieremia.” The opening dance “Kiona and the Little Bird Suite” features live drumming, singing in harmony and chanting. It borrows from the body percussion of Samoan slap dancing, and occasionally dips into the swaying hips and wave-motion arms you might associate with the South Pacific.

“But Mr. Ieremia also borrows freely and organically from Western contemporary dance, incorporating a little vocabulary and a lot of structure. Sections of choreography look like intricately interlocking machines or an impatient god trying to solve a Rubik’s Cube of people. However elaborately Mr. Ieremia arranges his dancers, he keeps them going, going, going. Even when they’re sitting on the ground, they’re still rocking, their fists pounding their thighs.

“This restless, relentless quality carries over into the program’s more thematically ambitious works, fueling and limiting them. The extensive program note for “As Night Falls” (2016) expounds on the demise of democracy and news-inspired despair, but this topical content is visible in the work only briefly, as the dancers kneel with their hands up. Then they’re off again, flying along with recorded Vivaldi.”

“The program closer, “Method,” set to two movements of Bach Brandenburg concertos in a New Zealand Guitar Quartet arrangement, resembles Paul Taylor’s classic Bach romp, “Esplanade,” but on fast-forward. Whether the music is adagio or allegro, this dance is always pedal to the metal — the dancers running, spinning, one leaping headlong into the others’ arms, another rolling across the stage as the others jump over her. There’s no slowing down for the darkness of “Esplanade,” and so the dance skates over depth. But if it’s only a race, it’s full of grace.”

Founded by Neil Ieremia in 1995, Black Grace draws from his Samoan and New Zealand roots to create innovative dance works that reach across social, cultural and generational barriers. The company’s U.S. also takes the company to Boston, Maryland, Minneapolis and Los Angeles.