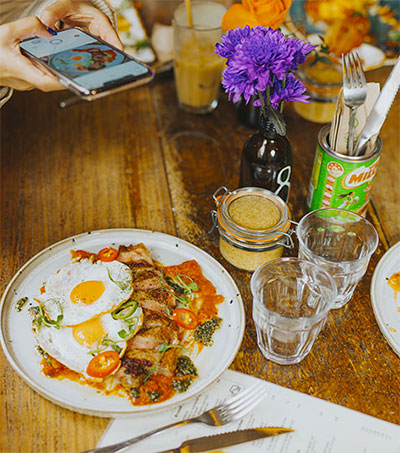 Mancunians Queue for Brunch at Federal

“This café has already made itself comfortable in its busy perch near the Great Northern. On a Saturday morning, we’re threatened with a 40-minute wait for a table (thankfully, the queue moves much quicker),” Jackson writes for the newspaper.

“Although the vibe is similar to its sister site, with exposed brick, plants and yellow furnishings, there are subtle nods to Ribeiro’s native Portugal woven in to its fabric – the bar has been crafted out of cork from Porto, for one.

“A pair of flat whites (£2.60) are far superior to most others in the city – velvety milk folded neatly around a punchy shot of Ozone espresso.

“[The menu is the sort] that will nourish you back uphill from your hangover downward spiral without lecturing you about eating your greens on the way.

“The realms of Bondi Beach, the Great Barrier Reef and the Daintree Rainforest couldn’t be much more removed from the grit and grey of Manchester. But with Federal dominating weekend mornings, the city at least looks a little sunnier.”