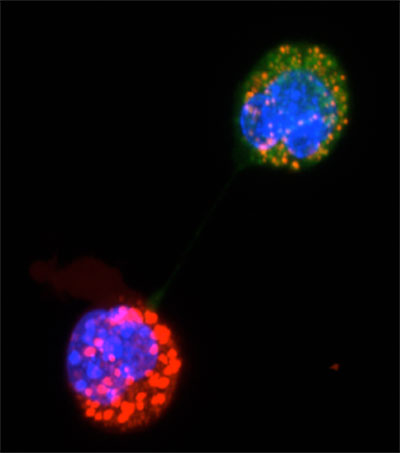 New Zealand and Australian scientists have observed DNA moving between animal cells in a breakthrough discovery that may lead to a better understanding of a range of human diseases and new gene therapies.

The team led by Professor Mike Berridge, of the independent Wellington-based Malaghan Institute, claimed to be the first in the world to demonstrate mitochondrial DNA movement between cells in an animal tumour.

The research laid important groundwork for understanding human diseases other than cancer, since defective mitochondrial DNA was known to account for around 200 diseases and was implicated in many more, Berridge said.

In mouse models of breast cancer and melanoma that had their mitochondrial DNA removed, replacement DNA was acquired from surrounding normal mouse tissue. After adopting this new DNA, the cancer cells went on to form tumors that spread to other parts of the body.

“Our findings overturn the dogma that genes of higher organisms are usually constrained within cells except during reproduction. It may be that mitochondrial gene transfer between different cells is actually quite a common biological occurrence,” Berridge said.