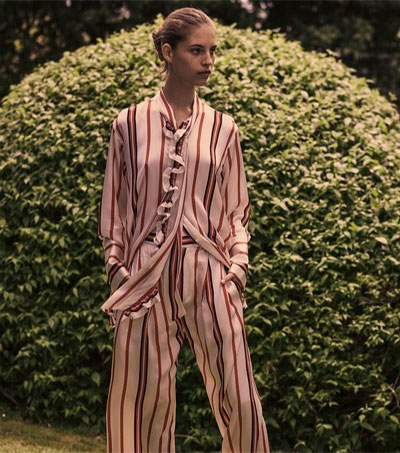 According to Vogue magazine, New Zealander Maggie Marilyn Hewitt, 23, “is a card-carrying member of the [millennial] generation, but her qualifications extend beyond age factor.”

“For one, she’s entrepreneurial, disrupting the traditional fashion system with her policy of presenting only during the preseasons,” Nicole Phelps writes for the magazine. “For another, she’s globally aware, putting an emphasis on her burgeoning brand’s sustainable and ethical bona fides. Clothing-wise, too, the millennial label more than fits. [Hewitt] is serving a trend-conscious demographic, and as such, she’s mixing sport and finery – read: sweatshirts and silk ruffles – in ways that seem odd to older eyes, but have nonetheless come to define the look of the young in the late 2010s.

“[Hewitt] says she’s designing for her peers. Come next June, when this [pre-fall] collection arrives in stores and online, her fellow 20-somethings will be teaming shirtdresses with track pants, wearing kilts over trousers, and donning individual pieces that create an of-the-moment layered look – see her smocked two-in-one top and a skirt designed to look like a button-down tied around the hips. Naturally, Marilyn has a slogan T-shirt. Paired with a mannish suit cut in the style of Demna Gvasalia’s Balenciaga, it spells out a favourite saying of her dad’s: We’ve got this. Yep, she does.”

Hewitt is a graduate of Auckland’s Whitecliffe College of Arts and Design. 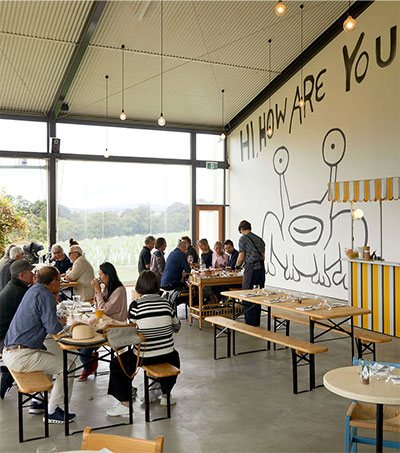 “I’ve been eating at Attica Summer Camp, a four-month pop-up at a winery in the Yarra Valley of Victoria,” New York Times critic Besha Rodell writes. “It’s one of many projects…

Burgers and High Gastronomy to Write Home About