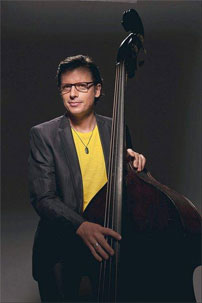 Originally from Auckland, SF Jazz Collective bassist Matt Penman studied at Boston’s Berklee College of Music before relocating to New York in 1995. Penman, 37, is a longtime lynch pin of the Collective, which was launched in 2004. This year, in addition to performing its eight members’ own originals, The Collective is focusing on their arrangements of tunes by a particular “classic” composer, this time Stevie Wonder. Over the years the group has played jazz composers such as: John Coltrane, Herbie Hancock, Thelonious Monk, Wayne Shorter, McCoy Tyner, Horace Silver. Two years ago, the band switched things up. It put Wonder to a vote, and he “won by a landslide,” says Penman, who joined the Collective in 2005 and has toured internationally with the band.