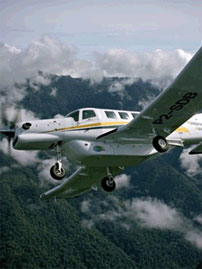 A host of New Zealand companies are keen to enter the Indian aviation market enticed by the South Asian country’s booming economy and its burgeoning aviation sector growing at 19 per cent. Pacific Aerospace, one of the leading manufacturers of smaller aircraft, said some Indian airlines have already shown interest in buying its P-75, a tough short haul plane ideal for regional connectivity. Pacific Aerospace general manager Todd Stephenson said a deal with one of the airlines could be announced shortly. Stephenson said the plane has low operating costs compared to many competing planes like Cessna. Fitted with a Pratt & Whitney engine, the multi-utility 1-seater craft can do duty as either a passenger or a cargo plane, is easy to service and has a 1 per cent safety record till now. “There has never been one lost due to an aircraft issue,” Stephenson said. As well, Wellington-based Superstructure is taking a big slice of the aviation safety software business. The company already has a tie-up with Jet Airways India and is talking to other airlines in India for deploying its software.