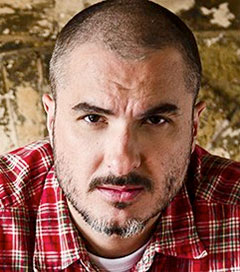 Lowe Is ENERGY Personified at BBC 1

In the studio of the BBC’s Radio 1 station, the boisterous New Zealander Zane Lowe is a few minutes into his own show, Peter Robinson reports for the Guardian. “RIDICULOUS SOUND!” Lowe honks over the music. “FULL OF ENERGY! FULL OF FRESH! That’s what we want from our rock bands and there’s not enough of them around at the minute … HOLD TIGHT!”

Lowe’s dynamic, breathless presenting style tends to leave listeners feeling as if they’ve been repeatedly but rather enjoyably thumped in the face. “My wife tells me off for using my radio voice at home,” he laughs. “‘Don’t talk to the kids in your radio voice!’ she says. ‘I don’t have a radio voice!’ I say. ‘You have a fucking radio voice,’ she says.”

Lowe’s been with Radio 1 for 10 years, following a spell at Xfm. I tell him that one of my favourite Zane Lowe moments occurred when he was sitting in on the breakfast show. At seven in the morning, a bleary-eared nation was assaulted by an insanely aggressive Skrillex remix. Over the top of this we could hear the voice of Zane Lowe bellowing: “DON’T BE SCARED – IT’S ONLY MUSIC!”

I ask Lowe if he thinks, in 10 years’ time, that Radio 1 will even still be a radio station. “WHAT a question!” he gasps. “HOLD THAT THOUGHT!” He whacks on a Sam Smith record. “Well, we need to be in the PUB for this conversation! But despite the Internet, and all its unlimited possibility, people still gravitate towards radio. Whether it’s Radio 1 or George FM in New Zealand, you have stations you trust, and people you trust working at those stations.”