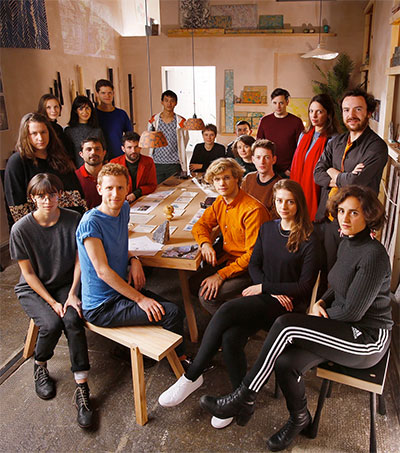 A collective of 18 young architects called Assemble – one of whom is New Zealander Louis Schulz – has become the first group of “non-artists”, and the youngest, to win the annual £25,000 British art award, the Turner Prize. The prize was presented by former Sonic Youth band member Kim Gordon at a ceremony in Glasgow.

Assemble won with a Liverpool-based project which revolved around the refurbishment of a group of houses in a community in Toxteth that had been ground down, ignored and disenfranchised over the years, with houses demolished or left to rot.

The Guardian’s Charlotte Higgins was at the award ceremony where there was a mixed response to the announcement.

“While one corner of the room erupted with justified delight, there was an air of frustration elsewhere,” Higgins writes. “One artist told me that we had been present at the death of the Turner prize. Another was bewildered by the fact that, on the one night of the year that a visual artist might be celebrated and their work brought to a wider audience, the jury had seemed to declare their own artform irrelevant.

“[Prior to the ceremony] four of the Assemble crew pitch up at Tramway [Café Bar] to talk about their work. They were, they say, as surprised as anyone to have been nominated. Do they think they are artists? Schulz, 27, studied history and politics, ran a farmer’s market and worked as a court clerk before joining Assemble. ‘Before this it’s not something we ever bothered to think about,’ he says. ‘And it’s funny, because we are not in control of this perception of us as artists or not. For us it’s not that important: it’s an academic discussion. We are more interested in doing good projects.’

“Assemble is deeply pragmatic, which allows a very dynamic, articulate and intriguing group of young people to self-organise and work in ways that suit them. They are hoping the Turner prize will give them a fresh platform: there is a lot to be discussed at the next Assemble “summit”.

“Schulz explains that when work comes in, an email goes round, and everyone has the chance to express interest. ‘We can’t say whether we’d do it or not. It doesn’t sound like our kind of thing – but we wouldn’t rule it out.’”

Judges described Assemble’s project as a “ground-up approach to regeneration, city planning and development in opposition to corporate gentrification”.