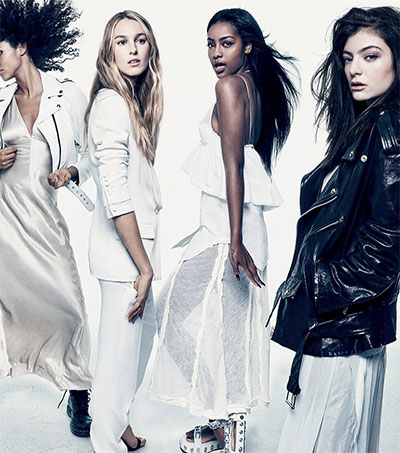 Lorde’s Second Chapter Is about to Begin

Lorde, in Marques’ Almeida, poses together with American singer and actress Zendaya, 19, in Vogue magazine’s January 2016 issue for a “Be Yourself” spread which includes athletes, artists, writers, dancers and models.

“As fashion, following the world at large, embraces a new era of inclusion and authenticity and freedom, we gathered a few dozen emergent musicians, athletes, artists, writers, dancers, and models – the cream of the creative crop – to showcase the season’s most expressive pieces: real clothes that reflect real life,” Mark Guiducci writes.

“The phenomenal success (read: two Grammys) of this 19-year-old Kiwi superstar is just the preamble of the long career she is bound to have. With a much-anticipated sophomore album on the horizon, Lorde’s second chapter is soon to begin.”

In 2015, Lorde was featured in Magnets, a track on Disclosure’s second studio album Caracal.