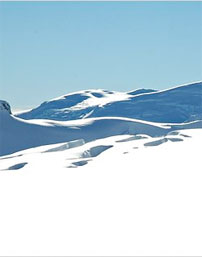 Looking at the Cold Hard Facts

In a tour de force of glacial geology, Columbia University’s Dr Aaron Putnam and his collaborators have been reconstructing much of the Holocene history of a group of mountain glaciers in New Zealand. Their goal is to analyse the notion that Holocene climate changes are global in scope. “The idea that the modern global warming is part of a natural cycle is a valid, testable hypothesis, and merits attention,” Putnam said. “Thus, we approached the idea as a testable hypothesis.” The results show that climate in the region around New Zealand did indeed behave quite differently than the climate of Europe during much of the Holocene — evidence that under natural conditions, the earth’s two hemispheres are out of step climatologically. “The modern warming is not consistent with the detected pattern of Holocene climate change, and implies a global forcing,” Putnam said. “We think the simplest explanation is that greenhouse gases have warmed the planet.”