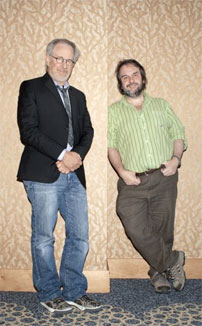 Animation/motion-capture combination enabled Steven Spielberg to ‘step in and film [The Adventures of Tintin: The Secret of the Unicorn] like a live-action film’, said Peter Jackson at Comic-Con, who was a surprise guest at the San Diego entertainment convention. Jackson said he and Spielberg had wanted to create a hybrid of live action and animation. “Even though the characters have these faces that you could never find on a real human being, you want the pores on the skin, the freckles, the stubble, the sweat.” Tintin looks extremely impressive. The quality gap between the footage and, say, Robert Zemeckis’s similarly motion-captured A Christmas Carol is a mile wide. Tintin hits UK cinemas on 26 October.