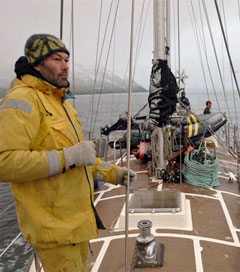 Life on Board Ship a Daily Adventure into the Wild

For the past 24 years, New Zealand mountain climber Greg Landreth and Canadian photographer Keri Pashuk have been living on a sailboat, travelling thousands of nautical miles into some of the coldest and most remote places in the world.

The pair married in 1990 and since then, they have lived life at sea aboard the “Nothanger.”

Originally, their idea was to run away and climb mountains in Antarctica.

Last week, they anchored in Halifax’s North West Arm for a three-week refuelling stop on their way south from Greenland.

Their steel boat is new to them. They picked it up in August and have been sailing ever since. They bought it for the purpose of taking researchers, photographers and scientists to areas not always accessible by large ships and ice breakers more commonly used for remote research.

The adventure is evolving into a mission. The couple wants to help preserve the pristine areas they can’t get enough of.

“What I would like to do is use all of the aptitude that I have gained and experience I have gained and turn that into the service of humanity because I believe we can use that to move forward to make a better world,” Landreth says.