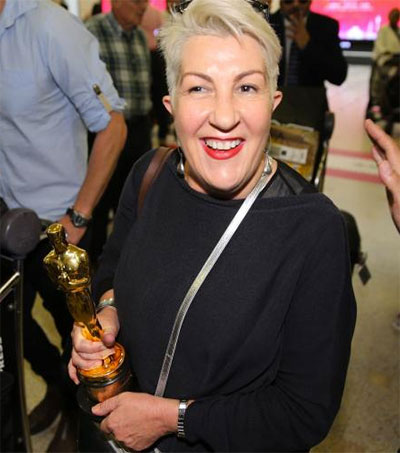 New Zealand-born Lesley Vanderwalt, who won both an Oscar for hairstyling and make-up at this year’s Academy Awards and the equivalent at the 2016 BAFTAs, talks to Vogue about bringing Mad Max: Fury Road’s desert wasteland to life, creating “post-apocalyptic beauty, starting with that unearthly glow.”

“I can’t say it was one of my most beautiful films,” Vanderwalt says. And though it’s true that George Miller’s post-apocalyptic vision is not conventionally beautiful, there is an undeniable romanticism in the sand-strewn beauty of its unbreakable women –shot against the arid backdrops of South Africa, Namibia, and across Australia –which earned the Oscar and made perhaps the greatest impact on the year’s statement trends.

“We wanted the girls to glow in this dusty, dirty, filthy world – luminous, almost like a mirage, like people couldn’t believe their eyes,” Vanderwalt says.

“The hair was very dirty. A lot of it happened in the desert. At the end of the day, it would practically be standing on end: You’d find a pile of red sand in the shower, and all of your hair was three times the thickness than when you went off in the morning.

“We used dust, different dry shampoos, and fillers as a starting point. The dust we used in the makeup was put through the hair. Then we’d use salt spray on top to create texture and scrunch it up. Toward the end, we were mixing salt into water and spraying it, we were going through so much of it.”

Vanderwalt has previously worked as a hair or makeup supervisor on films including Mad Max 2: The Road Warrior, Farscape, Moulin Rouge!, Star Wars: Episode II – Attack of the Clones, and The Great Gatsby.