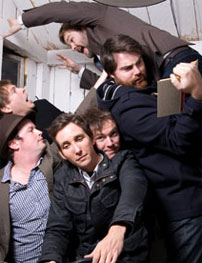 “If there’s one thing the Phoenix Foundation won’t abide, it’s dicks,” The Guardian’s Toby Manhire writes. “When it comes to dealing with other bands, says Luke Buda, the leonine frontman for the Wellington six-piece, all you ask is that they’re ‘friendly and nice’. ‘Yeah,’ agrees Samuel F Scott, leonine frontman No 2, ‘you should not be a dick.’ There is a discernible national flavour to this anti-dick stance, part of a laconic, diffident character that, Buda says, resists ‘the attitude of being able to really talk up what you do … It’s just not very New Zealand.’ As they set off to Europe for a second time this year, these thirtysomethings look to Jarvis Cocker — the quintessential non-dick, it is agreed — as something of an inspiration. ‘He’s done the same thing,’ Scott says. ‘He’s been in a similar world to us — he toiled away his entire 2s, trying to make the best music he could, and it wasn’t really until he was in his 3s that things started to pay off.’ The Phoenix Foundation tour the UK through July 16.