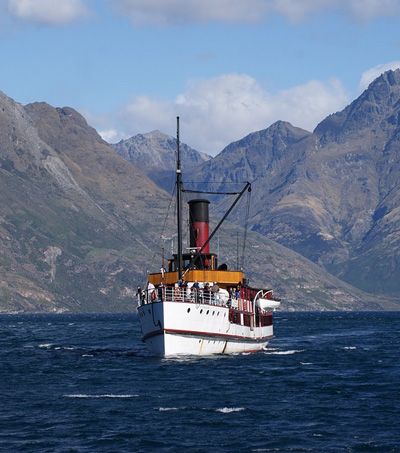 At Lake Wakatipu in New Zealand the old meets the new. “You cruise on an old steamboat yet can explore the area on e-bikes,” writes Cameron Wilson in an article for the Evening Standard.

The steamboat he is referring to, the TSS Earnslaw, is “the oldest coal-fired steamer in the Southern Hemisphere that’s still carrying passengers every day.”

She was “launched in 1912 on Lake Wakatipu, the only body of water she’s ever known,” said skipper Laurie.

The ship seems strangely familiar to many. Skipper Laurie explains: “There’s a clue in the year the Earnslaw was launched: 1912. The technology you’re looking at is exactly as it was back then, and common to steamships all over the world.  Including one which sank in the Atlantic in 1912 — that’s the one you and everyone else instantly thinks of. The Titanic.”

40 minutes across the lake lies Walter Peak station, “, a working sheep farm set up for tourists with a demonstration shearing shed and fancy wood-fired barbecue” and Wilson’s next stop.

“The juicy piece of Merino lamb from the nearby Cardrona Valley is probably the best I’ll ever taste,” he writes.

Wilson then went on to explore the 63,650 acres of Walter Peak Station in the saddle of an Ubco bike, a New Zealand-designed and -built electric farm-bike.

“The trail we’re on has Lake Wakatipu in and out of view. The entire South Island is so picturesque that words are wasted on it,” writes Wilson.

“Queenstown is New Zealand’s action sports capital, offering bungee jumping, jet-boating and para-gliding; with all the whooping and squealing going on, silent bikes seem a brilliant addition,” as reported in the article.