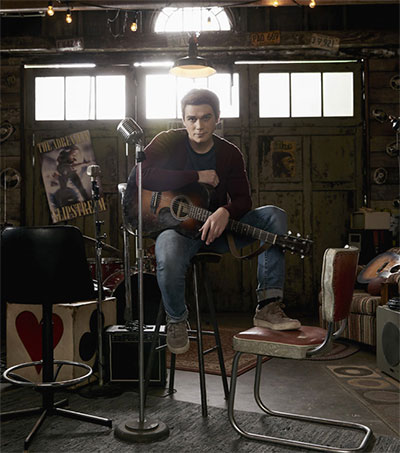 When a nostalgic American comic book comes to life, the stakes are high as it tries to appeal to old and new, millennial fans. Based on the ever-popular Archie Comics series, Riverdale debuted its first season with a bang and a second season is already in the works. Apa steps into Archie Andrews’ shoes as the red-headed, jock and musician who delicately breaks hearts while trying his best to keep his parents, played by Luke Perry and Molly Ringwald, happy. With the season finale just aired, Archie and his friends band together to uncover the real story behind one of their classmates murder.

Apa says he didn’t have any knowledge about the Archie Comics prior, or his famous on-screen parents to the show.

“When I got the audition, I had to do some research, go online, and find out what it was all about. I quickly learned that it was massive, that it’s been going for about 75 years,” Apa says.

“My mum knew who Luke [Perry] was. I remember when I met him he looked really familiar. And Molly [Ringwald] was the same. I didn’t really know who she was either, but I guess that’s the younger generation. I didn’t watch too much TV or movies when I was kid. I was out playing with the sheep in New Zealand. But I’m so lucky to have them playing as my parents. It doesn’t get much luckier than that. Luke is so great, we’re really close.”