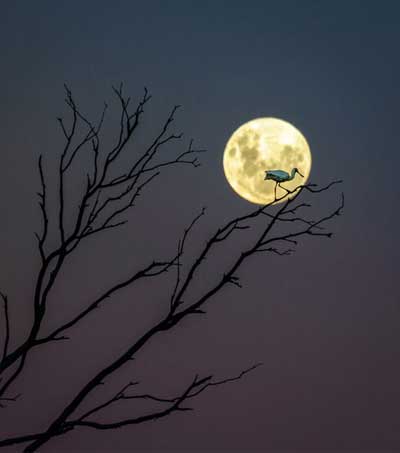 New Zealand photographers Andrew Caldwell (Napier), Lee Cook (Mackenzie District) and Stephen Voss (Invercargill) have been shortlisted for the Insight Astronomy Photographer of the Year 2016 Prize, as reported on Mashable.

Caldwell was shortlisted with a photo of “a royal spoonbill bird perching on a branch in front of an almost full moon” in Hawke’s Bay (pictured).

“It wasn’t just a landscape with the moon in it, or just the moon itself. I think that’s probably what they saw in it that was different,” he told Stuff.co.nz.

“The universe puts on its very own light show to see in the New Year on Jan. 1 2016, as the aurora australis or southern lights, arcs over Nugget Point on the South Otago coast of New Zealand,” in Stephen Voss’ photo, as described in the article.

Lee’s photo, taken in the vicinity of Plateau Hut in Mount Cook National Park, New Zealand, shows “the lonely hut, dwarfed by the snowy mountains of the park, contrasts with the abundance of star trails seemingly encircling the peaks.”

The photography competition, now in its eighth year, is run by the Royal Observatory Greenwich in association with Insight Investment and BBC Sky at Night Magazine.

The winners of the competition will be announced on September 15.