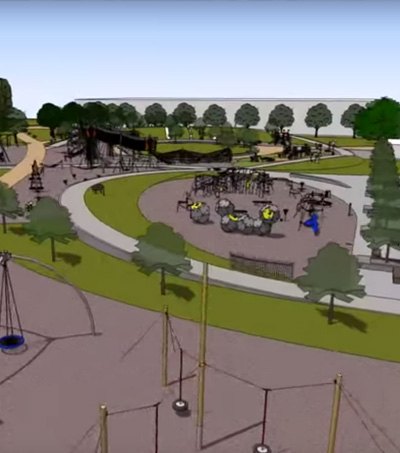 Local kids have helped to design a new playground as part of the rebuild of the Christchurch city center following the 2010 and 2011 earthquakes.

The Christchurch city council consulted the community about the rebuilt and found there was a strong desire for new playgrounds and family-friendly spaces, which is how ‘The Amazing Place’ competition was born.

Run by the government and sponsored by the Bank of New Zealand the project challenged children to design “the world’s best playground.”

The winning entry (out of 300) came from a team from Selwyn House School and was inspired by local children’s writer Margaret Mahy.

The playground, named Margaret Mahy Family Playground is due to be finished by Christmas. Officials hope it will draw children and families back into the central city.

“They looked at, for example, samples of rope, the color palette, [and] the design of the play equipment, and gave us their feedback on what they loved and what would make the playground even better,” said Rob Kerr, development director of anchor projects at the Canterbury Earthquake Recovery Authority.

“The final, 2.5-acre playground is designed around local stories—those of Mahy and another children’s writer, Elsie Locke, and from the Māori tribe Ngāi Tahu and is divided into four areas reflecting Canterbury’s varied landscape: a forest zone, coastal zone, plains zone, and wetland zone.”

The playground will also include a 13 feet wide slide, a fitness trail, picnic areas, and a café, as well as an interactive lighting design to make it a social space in the evenings.

As part of The Amazing Place initiative, another competition was held for older children to help rebuild Christchurch’s central business district.

“Prioritizing children’s role in the rebuild encourages young people to strengthen their bond with the city”, according to Citylab.

“You know, we lost a lot of buildings,” said one of the involved students.