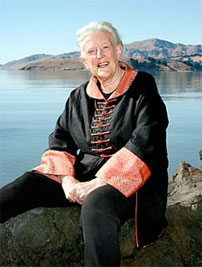 “Margaret Mahy, an award-winning children’s author who tested the limits of her readers’ whimsy and courage with fantastical tales of witches, hauntings, infinite fog, and robbers brought to account by peppery grown-ups wielding chocolate cake and balloons, has died in Christchurch,” Paul Vitello writes for The New York Times. “Mahy wrote more than 150 books, including illustrated stories for small children like A Lion in the Meadow (1969), Beaten by a Balloon (1998) and the best-selling Bubble Trouble (2009), as well as young-adult novels, including The Haunting (1982), about a clairvoyant boy, and The Tricksters (1987). Reviewers raved about her whimsical yet hard-edged sensibility, her grasp of childhood’s astonishments, her ability to leaven unbelievable situations with believable characters. Reviewing The Haunting in The New York Times, the children’s book author Colby Rodowsky said her writing “took one’s breath away.” Mahy, who was known as May, was born on March 21, 1936, in Whakatane, the oldest of six children. She received her undergraduate degree and a master’s in English in New Zealand and became a librarian in 1957 after training at the New Zealand Library School. She was the first author from outside Britain to receive the Carnegie Medal, Britain’s top award for children’s literature, winning it in 1982 for The Haunting and in 1984 for The Changeover. In 2006 she received the  Hans Christian Andersen Award, an international prize.