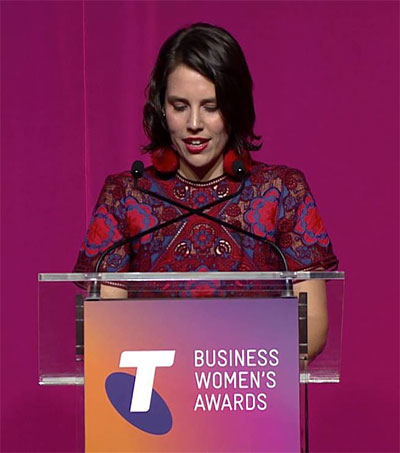 Australia’s Young Business Woman of the Year has been named and she is New Zealand-born Anna Ross, founder of Kester Black Cosmetics, a brand customers rank better than global name Butter London and in line with big player OPI.

Ross had worked a number of day jobs across her career, but boredom was setting in with her current projects and when she started researching nail polish to use to paint stirling silver for a jewellery design, she discovered that this corner of the cosmetics world was marked by harsh chemicals and a poor reputation on animal cruelty.

“When I started looking into it I realised it was very bad,” Ross tells SmartCompany.

“But I don’t believe it’s up to the consumer to work these things out for themselves.”

Realising that nobody in Australia had come up with a good alternative, Ross started working with a chemist to develop a line of vegan, water based nail polish products.

Kester Black has developed a cult following in the Australian, European and New Zealand markets and has recently picked up a distributor in Asia.

“The biggest expansion has been in the Middle East,” Ross says. One of Kester Black’s development projects has been coming up with a nail polish for Muslim women, with its water-based formula suitable to be worn during prayer rituals.

“And we’re the first cosmetics company in the world to get BCorp certification,” she says.

BCorp is a network of companies working towards social impact, and the nod to Kester Black is an endorsement of the positive social impact that the company makes – something Ross says she thinks about every day, from the paid parental leave policies that the company has for staff, to a positive attitude on work life balance.

Ross is a graduate of Otago Polytechnic where she studied fashion design. She moved to Melbourne in 2009.