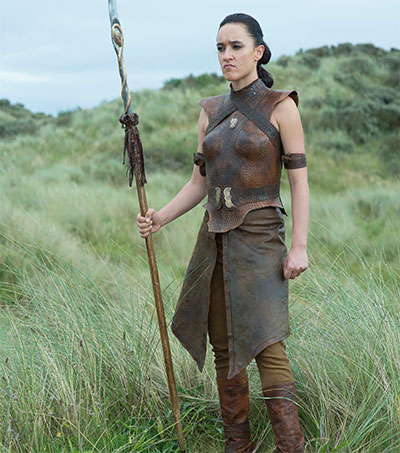 Not much more than a year ago, New Zealand actress Keisha Castle-Hughes, 25, was a Game Of Thrones fan scouring Hollywood Boulevard for a long blonde wig to wear to an informal dress-up event to watch the first episode of the new season. Now she’s part of it, playing seasoned warrior, Obara Sands and wondering if she’ll be back for more hand-to-hand combat in leather.

Castle-Hughes, who was recently in Australia for the pop culture convention Oz Comic-Con, was a longtime fan of the books on which the series is based. She read the first three in high school, “which feels like it was forever ago now, but wasn’t really,” she says wryly.

When she auditioned, it was a character described as “a fierce, brutish warrior with an Amazonian physique, which I’m not at all. But there were qualities that I understood within that description that I thought I could embody.” In a way, it connected back to Whale Rider, to the story of a young Maori girl who had to prove that she could be a tribal chief. “It was just a matter of convincing them that I didn’t have to be six foot tall.”

She recently did an hour-long pilot for Roadies, a TV series written and directed by Cameron Crowe. Her character is a sound engineer, “one of a group of roadies on the road forever, looking after a big American band”. It also stars Christina Hendricks, Luke Wilson and Imogen Poots.

It’s good to go from the fantasy past of Game Of Thrones to the contemporary world of Roadies, she says, and to be cast in a role that wouldn’t necessarily go to a woman, “especially someone as young as me”. And, although she relishes a career in a business “which is ever-changing, and every job feels like you’re starting from the beginning”, she’s decided that she needs another creative outlet. She has started working on a screenplay for a feature film.