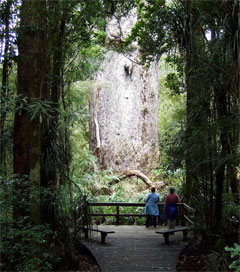 Travelling through Northland on a ten-day tour of the country, National Post writer Maryam Siddiqi decides that ultimately, “the rugged west coast and its glittering green water” left the greatest impression on her. “As I tackled the winding roads through the Waipoua Forest, home to the oldest kauri trees known to humans, I thought, ‘If this is the only thing I see in my time in New Zealand, the trip will have been worth it,’” Siddiqi says.

“If you want to feel insignificant, plant yourself in front of Tane Mahuta, the god of the forest, a 2000-year-old tree that spans 4.4m in diameter. It is an intimidating wall of wood, one I encountered on a twilight walk with Footprints Waipoua, which leads night walks into the forest and explains the uses Maori had for kauri trees and the esteem in which they are paid by these people.

“New Zealand was once covered in kauri trees. Pretty much anywhere I’ve gone on the North Island, someone will tell me the area “was once covered in trees.” Today, only 2 per cent of the forest remains. Current predators are wildlife, such as wild pig that eat the roots and possums, which strip the trees of their leaves. My Footprints guide described possums as New Zealand’s speed bumps. ‘We never avoid them,’ he said.”