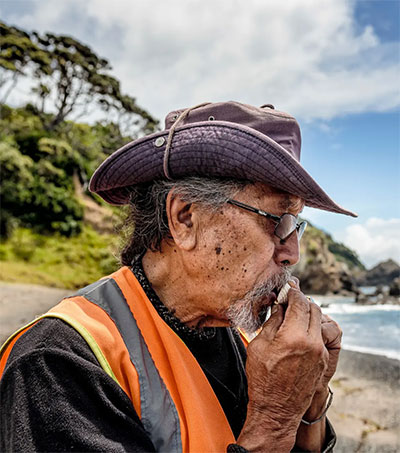 What Is the Sea Telling Us about Whale Strandings?

Whale whisperer Hori Parata was just seven years old when he attended his first mass stranding, a beaching of porpoises in Northland, their cries screeching through the air on the deserted stretch of sand.

Seven decades later, Parata, 75, has now overseen more than 500 strandings and is renowned in New Zealand as the leading Māori whale expert, called on by tribes around the country for cultural guidance as marine strandings become increasingly complex and fatal.

“Man’s greed in the ocean is hurting the whales,” says Parata, a fierce and uncompromising elder of the Ngātiwai tribe of eastern Northland.

“We’re having to put up with a lot of stuff today. The public want to hug the whales, they want to touch them, they want to feel good – that’s not the thing. We feel that is ridiculous.”

Whale experts regard Aotearoa as the whale stranding capital of the world, with more than 5000 incidents recorded since 1840, and an average of 300 individual animals beaching themselves each year.

Concrete information on why whales strand remains elusive, but “sickness, navigational error, geographical features, a rapidly falling tide, being chased by a predator, or extreme weather” are all thought to contribute, according to the Department of Conservation.

Climate change is to blame too, scientists think, with warming ocean temperatures moving whales’ prey closer to the shore and forcing them to pursue their food into shallow waters.

And as more whales beach and die – from exhaustion, heat stroke or seagulls feasting on their flesh – an acute sense of grief is growing among Māori, who regard whales as their ancestors and taonga.

“These days it is like a zoo. People just want to come and gawk at us, without even trying to understand what is happening with the animals and the environment,” Parata says.

For Parata and his family the slow, painful deaths of their ancestors are personal – and ultimately devastating – for the health of the tribe and the sea.

“It’s very emotional. Our ancestors tell us the strandings are a sign from the sea. So what is the sea telling us? We need to listen.”

“New Zealand’s recent election, which ended up with an electoral landslide for the incumbent Prime Minister Jacinda Ardern, says something about women in leadership roles. With the leaders of New Zealand’s…