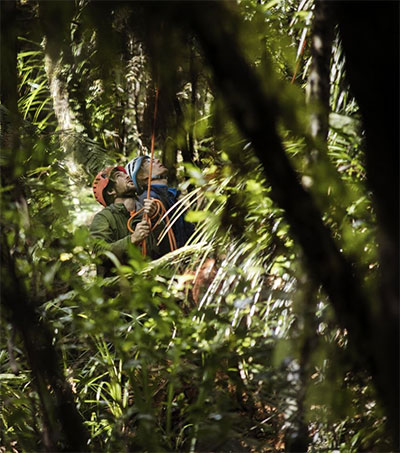 Two arborists, chest-deep in underbrush, secured a rope slung over a branch in the Waipoua Forest, close to the northern tip of New Zealand. Scott Forrest pumped his fist, Per Liljas writes for The Washington Post. “Yeah, great stuff,” he said. He recently won the world championship for tree climbing. But the job this day was a special privilege.

Forrest was about to ascend a 45.2m, 2000-year-old kauri tree known as Tane Mahuta, a tree so sacred to Māori that even touching it is taboo.

The climb, carried out in late August, was a matter of urgency – and part of a growing collaboration among local iwi Te Roroa, arborists and researchers.

The goal is to prevent Tane Mahuta and other kauri trees from succumbing to a deadly, fast-spreading rot called kauri dieback.

In preparation for the climb, the team disinfected all its gear and had it blessed by a Māori elder. The equipment included a spectroradiometer, which provides readings from the tree canopy to detect types of bark, leaves, lichen and habitats for forest animals. Later, these readings can be checked from a drone to monitor the ecosystem and its health.

“That would be extremely useful, considering how large our forest is,” said Taoho Patuawa, Te Roroa’s science adviser.

Tane Mahuta – with a massive bone-coloured trunk and crown of tangled branches – is named after the Māori god of the forest, who separates his earth mother and sky father from an embrace and thereby lets light into the world.

Early detection of kauri dieback is key. Once a tree shows visible symptoms, it is already doomed. This means a loss for the forest at large because the kauri is called a “foundation species” that shapes the ecosystem around it.

The disease is caused by a water mould, phytophthora, literally “plant destroyer”, which leaches plants of their nutrients and has wreaked havoc around the world.

The dieback was first reported in New Zealand in 1959. In the past decade, a unique strain of phytophthora has been identified as targeting kauri. Last year, it was detected only 30 metres from Tane Mahuta.

A study in 2017 showed that the pathogen had doubled its spread in Waitakere Ranges, a regional park in Auckland. This led the local iwi, Te Kawerau a Maki, to place a cultural prohibition on entering the forest. Outdoor enthusiasts went up in arms.

“The hikers should understand that we’re their landlords. We take a 100- or 1000-year perspective, and right now this forest needs to rest,” said Robin Taua-Gordon, the tribe’s heritage and environment trust officer.

Original article by Per Liljas, The Washington Post, January 12, 2020.

Photo by Per Liljas.