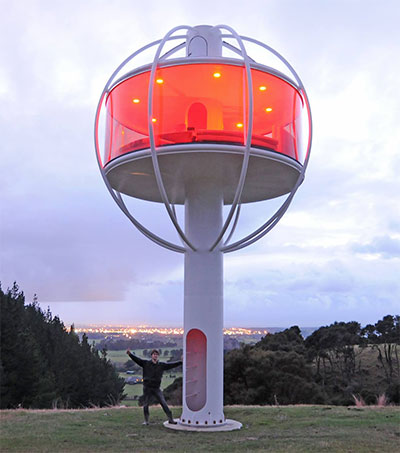 After shooting the breeze one night with his mate Grant Ramsay, a mechatronics engineer, Williams committed to building the ultimate app-controlled treehouse.

But after working on the design for several months, he ditched the treehouse idea for something better: a Skysphere in the middle of nowhere with a room full of custom furniture, multicolour LED lights, and a built-in beer dispenser, all operated by voice commands.

The 270 square-foot Android-controlled man cave pitched 33 feet off the ground is completely solar-powered and has a carefully-engineered window that offers 360 degree views. Visitors whose fingerprints have been recorded are greeted by name when they come in the door.

What Inhabitat found most impressive about the structure was that Williams came up with the design and ordered all of the materials before he even knew how to weld. He started this DIY project from scratch, teaching himself everything he needed to know along the way.

With help from Ramsay and others, Williams learned about foundation design, structural engineering, earthquake simulation, and wind simulation.

The window, for example, is made with polycarbonate, which Williams says shrinks and expands more than steel, so he had to engineer a special seal system with 2-inch flexibility to ensure the 360 degree window can withstand high-force winds.

Williams said, “the ultimate man cave to me is to have beers served to your hand while you’re sitting on the couch. The arm rest has a coaster that goes down then comes back up with a beer on it, a good entertainment system, playstation, all being 10m up in the air with a cool view.”