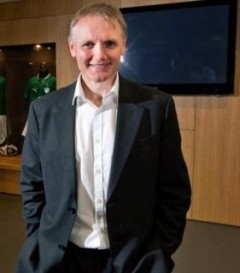 Joe Schmidt, former Bay of Plenty ‘Steamers’ coach is the new Ireland Rugby coach. His appointment has brought a renewed ‘feel-good factor’ to Irish rugby, says the the Irish Times. Schmidt has been appointed until 2016. “I’m really motivated by challenge and this is a super but intimidating one’, Schmidt told the Irish Times. ‘If you’re going to find out what you can bring to a group, what better way than to take on one of the big jobs in world rugby. I’ve had a good look at a lot of Ireland’s players and when we get our collective together, we’ll try to improve performance and make us as competitive as possible’.  Instrumental in Schmidt’s decision to swap provincial for Test rugby, according to the Irish Times,  was the scope it would provide to help his wife look after their nine-year-old son, Luke, who has epilepsy. ‘My family were part of the decision; they’re very settled here. I’ve spoken out lately about our smaller son and he’s looked after superbly at his school. That was a big part of our decision making,’ Schmidt said. The Irish Times hailed the selection of ‘the likeable Kiwi – the popular choice with players, punters, pundits and the Irish Rugby Football Union (IRFU) themselves.’ IRFU Chief Executive Philip Browne has said that Joe Schmidt is ‘the right man for the job’ Officially, Schmidt is still the Leinster coach, and will remain there while the Irish side continue their quest for a Pro12/Challenge Cup double. He takes charge of Ireland for the first time against Samoa in November.